Don’t Get Hooked By the Enemy 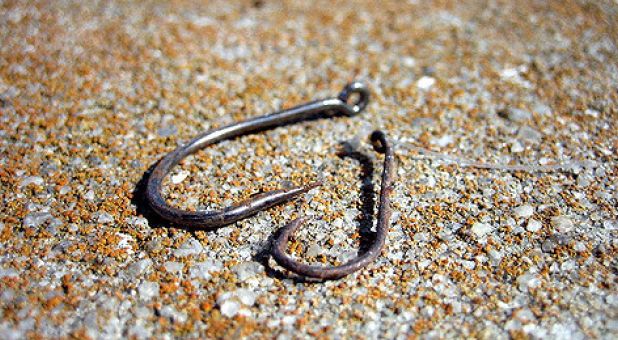 The enemy hates to see the people of God advancing and moving forward.

I want to share a dream I recently had, along with the insight the Lord gave me, as I believe this to be a warning dream, offering both a challenge and an equipping from the Lord for the Body of Christ.

In my dream, I was walking down a road late at night, and there were very tall buildings on either side of the road. There were many people in front of me, behind me and on both sides, and I noticed people on top of the buildings as well.

As the dream progressed and I kept walking, I saw many “strings” dangling from above. The strings looked like fishing line and there were fishing “hooks” on the ends. I then saw signs on the sides of the building along the road, just ordinary signs. As I continued walking along, I noticed many people being taken away by the hooks that were in their pathway, but I kept walking. The further along the road I went, the signs on the building became neon signs. As I continued on, the signs kept getting “brighter and brighter”. The hooks were different as well, and became bigger and shinier.

I then saw people in front of me and behind me being rapidly yanked away by the hooks. I could not see anything on top of the buildings of where the hooks were coming from. People who were being pulled away by the hooks would start to turn and look at the bright signs on the buildings. As they turned, the hooks would get caught on their jaws and pull them up. I also saw some people who would be hooked by their mouths or their ears. I even saw several people be hooked in their nose and then be pulled up by one of the hooks.

The Distraction of Bright Lights

As the dream continued on, the amount of people around me, in front of and behind me became smaller and smaller. It seemed like everyone was being pulled away by these hooks. The lights on the buildings were getting brighter and brighter as well.

The further I walked down this road, there were more and more hooks that kept increasing in size and number. I was now having to weave my way through the hooks. I knew in the dream that if I turned aside to look at the bright signs that I would be pulled away by one of the hooks.

I was then awakened from the dream at 5:21 in the morning. I immediately heard the Lord say, “Look at Facebook.” I thought, “Really? Facebook this early in the morning?” But I knew when I opened up Facebook that the first thing I saw would be very important in regards to this dream.

I opened up my phone and saw a post about a prominent minister, and saw that they fell tragically. In this post, this minister was admitting publicly to his fall. I knew that the Lord was trying to connect this occurrence to the dream. I immediately knew the Lord was wanting to tell the Body of Christ that the enemy is strategically trying to come after many Believers in this season. Distracting lights are shining so bright on some people that they are losing their focus and being pulled away.

A Great Turnaround! Be Wise to the Enemy’s Schemes

I am telling you my friends, I believe we are about to experience a turnaround in America. God is releasing a powerful outpouring and reformation that many have been praying about for many years. However, the enemy is also coming strategically in this hour to try to derail people’s destinies. We must never allow ourselves to think that we “have arrived” to a certain place where we do not need to be wise against the enemy.

The enemy is coming after people to pull out of their race and destroy ministries, marriages, businesses, families and organizations. He is coming after your character and integrity. But if you keep yourself consistent in the place of intercession, maintaining a lifestyle of both prayer and fasting, you will not be pulled away by the hooks of the enemy.

The enemy hates to see the people of God advancing and moving forward. The longer you continue in anything along your path, the enemy will become frustrated and try to tear apart your marriage, wreck your children, and ruin your business. The enemy wants to destroy everything that God has established in your life up to this point. But let me encourage you: God has not brought you this far to just bring you this far only!

Stay Focused on God and His Calling

We must stay wholeheartedly focused on what God has called us to do. We are in a season of acceleration and great promotion in the Body of Christ. However, we must become extremely focused first on the Lord and second, on our calling. Don’t allow the enemy to come in and hook you in any areas!

Stay close to the Lord, and keep pursuing your spouse and nurturing your family. Stay close to the true apostolic and prophetic voices God has placed in your life. God has placed those leaders in your life to help protect you and keep you on course. Surround yourself with wise people who care about you, your marriage, your family, your business or ministry, and your character and integrity. This is not a time to run alone! Keep your eyes upon the Lord in this season. The hooks of the enemy are there but we must be wise to him. I challenge each and every one of you, stay focused!

Joe Joe Dawson is the founder and Apostle of ROAR Apostolic Network and ROAR Church Texarkana. Joe Joe is married to the love of his life, Autumn Dawson and they have three children Malachi, Judah and Ezra. The Dawson’s live and teach a lifestyle of revival and awakening. Their desire is to see every Believer fulfill their God-given destiny and live life to the fullest in God. Joe Joe is also the author of Living Your God-Sized Dream and Recipe for Revival.