By: Jasmine Bell|Published on: Jul 13, 2019|Categories: Faith that Overcomes| 0 comments 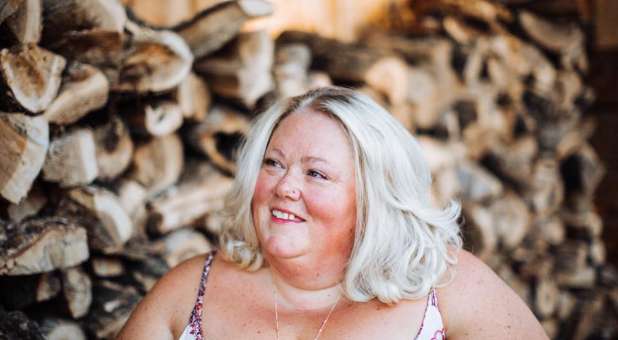 Jenna Winston cursed God, but something inside her broke.

“I just started weeping uncontrollably,” Winston says. “I started opening up about all of this stuff that had been stuffed inside for so long. It was in that moment, everything changed. Within a couple of weeks, through the most supernatural chain of events, I ended up in faith-based recovery.”

She shared her story with the Charisma News podcast as part of the “Addicted” series, sponsored by Courage for Life.

Once a raging addict who would fake tooth pain for narcotics, Winston now runs Heartscaping, a prophetic deliverance ministry that helps heal the root of pain and addiction.

“Most people focus on their behaviors and what they do wrong,” Winston says of working with addicts and traumatized victims. “But my passion is getting to the roots behind what got them there in the first place, because when you can get those roots ripped out and loose the perfect love of heaven, the perfect love of Jesus, those behaviors fall off on their own.”

Winston says much of addiction is rooted in fear and lies.

“When people hear the word ‘deliverance,’ they think it’s like, ‘Come out, you evil spirit,’ but deliverance can be as simple as exchanging a lie for asking God what His truth is about me,” Winston says. “Sometimes, we need to let His truth be louder than the lies, and that brings so much deliverance.”

“I grew up in a home where I dealt with all kind of abuses and traumas at the same time as going to church and saying we loved each other,” Winston says.

By 18, she was married. At 19, she had her son. When she turned 28, she began to suspect her husband of cheating, which triggered suppressed memories.

“All the traumas that I suffered and all the memories were popping up,” Winston says. “I became crazy with neurotic anxiety and ended in the psych ward a few times for meltdowns where I took a lot of psych meds.”

That’s where she discovered her penchant for opiate-based pain pills.

“They made all my pain and anxiety go away, and I felt like Superwoman,” she says. “It was light a light bulb switch, and I became an addict overnight.”

Winston says she was a functioning addict for years. She held a job while popping pills on the side.

“Slowly but surely, I lost it all,” Winston says. “I went from beautiful homes and cars and functioning with job to having my teeth pulled for drugs.”

That’s when she attempted suicide with 87 OxyContin.

A few weeks after the attempt, Winston found herself in a faith-based recovery program. Still, she smuggled in weeks’ worth of drugs, fearing the detox would kill her.

Until one morning, everything changed.

“I said out loud, ‘God, I’m done picking and choosing which parts of me You can have,'” Winston says she prayed. “I took all the meds over to the main house [of the rehabilitation center], and we flushed them down the garbage disposal.”

“Jesus was going into that darkness, and it had to leave,” Winston says. “I had this moment where I just started screaming, and all the rage and anger inside me came out. I screamed forever. I remember falling out in my bed spiritually, emotionally, mentally and physically exhausted.

“And Jesus crawled in that bed with me and just started to play with my hair,” Winston says. “He goes, ‘I am so sorry for the things that happened to you that made you not want to feel. And if you trust Me, I’m going to make every day of your life better than any day that you ever lived.'”

She surrendered everything to Him and now works with addicts as well as people who suffer anxiety, depression and other emotional disorders.

“My favorite thing in the world is seeing people get freedom,” Winston says. “Everything the Lord has set me free from, from rape to trauma to addiction to infidelities, from everything you can imagine, we can carry breakthrough.”

But much of that breakthrough depends on remaining vigilant in the war on drugs.

Listen to the podcast for more.