What It Truly Takes to Overcome the Python Spirit 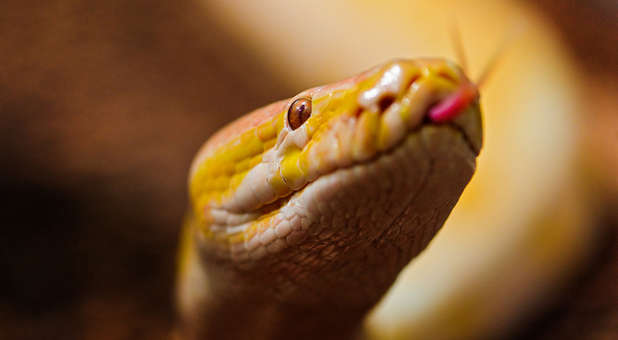 The python spirit is in the cross-hairs of many spiritual warriors, and practical revelation about how this demon operates has surfaced in recent years. Still, there are many who aren't aware of this enemy's devices. I wrote a column called What the Python Spirit Really Wants last week to open the eyes of those who may not realize this coiling spirit could be working to squeeze out the breathe of life (the Holy Spirit) and cut off your lifeline to God (prayer).

Before we go any further, let's do a quick review of last week's column so you can see this spirit at work in the Bible. You'll find it in Acts 16:16 when Paul encounters a girl possessed with a spirit of divination. The word divination in this verse comes from the Greek word for puthon, which translates in English as “python.” That's why many call this evil force the python spirit. Here's the Scripture in context:

“Now it happened, as we went to prayer, that a certain slave girl possessed with a spirit of divination met us, who brought her masters much profit by fortune-telling. This girl followed Paul and us, and cried out, saying, 'These men are the servants of the Most High God, who proclaim to us the way of salvation.' And this she did for many days” (Acts 16:16-17).

The prayer-hating python spirit drew attention to Paul and Silas in a hostile land, distracted them from their apostolic mission, and ultimately persecuted them sorely, even putting them in literal bondage. But Paul and Silas didn't stay there. They prayed and praised their way through—and so can you. But not just any type of prayer will root this spirit out of your midst.

After You Put on Your Armor

In spiritual warfare circles we talk a lot about the armor of God. Some of us even symbolically get dressed in our armor every day. We've memorized Ephesians 6:10-17—but a freedom key is in verse 18: “Praying always with all prayer and supplication in the Spirit, being watchful to this end with all perseverance and supplication for all the saints (emphasis mine).”

That's right, wearing heavy battle armor is not enough without prayer—and the right kind of prayer. Remember, Paul was on his way to the house of prayer when python attacked. Python doesn't want you in the place of prayer in the presence of God because when you are engaging in Spirit-led prayer you're doing damage to the kingdom of darkness. The enemy knows that your authority in prayer in Christ's Name is what sets you free from his oppression—and sets others around you free. Scripture makes it clear:

“But at midnight Paul and Silas were praying and singing hymns to God, and the prisoners were listening to them. Suddenly there was a great earthquake, so that the foundations of the prison were shaken; and immediately all the doors were opened and everyone's chains were loosed. And the keeper of the prison, awaking from sleep and seeing the prison doors open, supposing the prisoners had fled, drew his sword and was about to kill himself. But Paul called with a loud voice, saying, 'Do yourself no harm, for we are all here'” (Acts 16:25-28).

Rooting Python Out of a City

The prayers and praise of Paul and Silas set the captives free, but that spirit of python was still reigning over the city when they left on the next leg of their mission. The python spirit can reign in a life or a region where people are ignorant of the devil's devices (see 2 Cor. 2:11).

We need revelation from the Holy Spirit about what is operating in our lives and in our territories in order to ultimately root it out and set up a guard against its re-entry by our authority in Christ. Now here's the rub: Although many have come to understand python's life-squeezing, breath-stealing tactics, we too often fail to engage Spirit-led prayer that would render this principality powerless.

This python spirit is a major influence in Florida, where we have more houses of prayer per capita than any other state. Python is so spiritually active in our state that it has manifested with an overrun of natural pythons in the Everglades. Experts point to as many as 100,000 Burmese pythons in the Florida Everglades that are reproducing rapidly. This snake is driving down populations of opossums, bobcats and raccoons and even swallows deer and alligators whole.

Although reciting rote prayers from a book may push back darkness for a moment, ultimately that spiritual-warfare strategy isn't going to deliver you—and keep you free—from python's grip. Freedom from python demands a deeper intercession. It starts with repentance and works its way into travailing prayer by the leading of the Spirit of God (Rom. 8:26-27).

What do we do, practically speaking? We need to pray to the righteous Lord who “has cut in pieces the cords of the wicked” (see Ps. 129:4) that python has coiled around us. We need to repent for our sins—and the sins of our cities—that have allowed python a stronghold so God can surround us with songs of deliverance in His presence (Psalm 32). We have authority in Christ to cut in pieces this coiling spirit but, again, it often takes travailing prayer with the Spirit of God to free the body from the head of the snake in a region.

I'll talk more about travailing prayer in next week's column. In the meantime, meditate on Romans 8:26-27 and ask the Holy Spirit to give you revelation on those verses. Amen.

Jennifer LeClaire is news editor of Charisma. She is also director of Awakening House of Prayer in Fort Lauderdale and author of several books, including Satan's Deadly Trio: Defeating the Deceptions of Jezebel, Religion and Witchcraft, and The Spiritual Warrior's Guide to Defeating Jezebel. You can visit her website here. You can also join Jennifer on Facebook or follow her on Twitter.