Spirit of Anarchy Rising in the Nations (Episode 028) 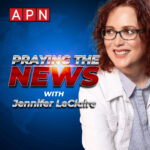 The spirit of anarchy is rising in the earth at a rampant rate. News headlines reveal how this spirit has gained a foothold beyond the entertainment industry into governments of the earth. This is a dangerous trend, and one that will escalate in the end times.

This is Jennifer LeClaire, and this is Praying the News. In today’s broadcast, we’ll look at clear examples from the news exposing the spirit of anarchy in the nations—and even in the church. We’ll also listen in to a prophetic word I released on June 24, 2022 about anarchy and, of course, pray. Today’s broadcast is brought to you by The End Times Watchman.

Maya Hawke, star of The Stranger Things and daughter of celebrities Uma Thurman and Ethan Hawke, was so enraged over the Supreme Court’s Roe vs. Wade decision that she said, “Bleep the Supreme Court on the Jimmy Fallon Show. Fallon replied, “I appreciate you saying that. Thank you for saying that message.”

Meanwhile, Hillary Clinton was so incensed with Clarence Thomas that she went for his jugular, calling the Supreme Court justice “a person of resentment, grievance, and anger” since they went to law school together. That’s one of the best examples of the pot calling the kettle black I’ve ever heard. How about you?

Whoopi Goldberg sent a blistering warning to Thomas about his interracial marriage. She said, “You better hope that they don’t come for you, Clarence, and say ‘you should not be married to your wife,’ who happens to be white.”

You’d expect anarchy spirits to influence entertainers and socialistic politicians, but what’s more disturbing is the anarchy in the church. Some megachurch pastors were silent on the Roe issue, but others came out and insisted that women have the right to kill their babies if they want to. Indeed, this issue hasn’t just divided a nation. It’s divided the Body of Christ.

What is ultimately behind much of this is anarchy?

We’re seeing news headlines about anarchy ramping up now. On June 26, just two days after I prophesied about the spirit of anarchy, The Kashmir Leader reported “Understanding NATO Enlargement through the Realist Principle of ‘Anarchy’.” And The Financial Times recently reported “Anarchy is a likelier future for the west than tyranny.”

Proverbs 11:14 tells us when there is no guidance, a people falls. The enemy want us to fall headlong into anarchy, which is lawlessness.

So how do we pray?

Praise God that His law is holy, and the commandments are holy and righteous and good.

1 John 3:4 tells us, “Everyone who makes a practice of sinning also practices lawlessness; sin is lawlessness.” Repent for engaging in lawlessness.

Pray that God’s will be done and His Kingdom come on earth as it is in heaven.

Pray for righteous leadership in your city, state and nation.

Pray that the church would rise up in righteousness and reject compromise.

Bind the spirit of anarchy.

Pray that the gospel would penetrate minds and hearts so that people can bow to the Spirit of Christ rather than the spirit of anarchy.

Pray in the Spirit.

Thanks for listening. Please give us a five-star review wherever you listen to podcasts and share this with your friends. Find the show notes at www.jenniferleclaire.org/prayingthenews.

Until next time, keep praying the news.