Did Miley Cyrus Sell Her Soul to the Devil? 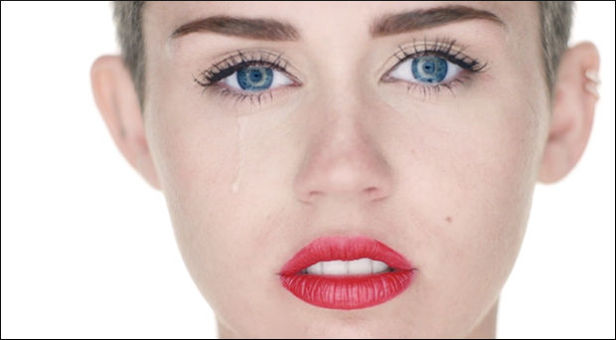 Just as the chatter about Miley Cyrus’ soft-porn twerking at MTV’s Video Music Awards died down, the former child star has left jaws hanging near the ground once again by stripping naked, straddling a wrecking ball and suggestively licking a sledgehammer in her latest video, “Wrecking Ball.”

Going for shock value to create a media frenzy, Miley is pushing well beyond anything Madonna or Lady Gaga have done in their most perverse performances.

Miley’s motivation seems clear: to sell records. She included the hashtag #WreckTheRecord, referencing her goal of racking up the most VEVO views in a 24-hour period with the video.

But is Miley Cyrus essentially selling her soul to the devil to drive pop-star success? How did she stray so far from home?

Think about it for a minute. Miley Ray Cyrus was born into a Christian family. Actually, her real name is Destiny Hope Cyrus. The former Hannah Montana star was raised Christian and baptized in a Southern Baptist church. She wore a purity ring when she was younger, signaling her commitment to practice abstinence until marriage. Now she’s making news for nipple slips and more.

So what went wrong?

Whatever happened, it didn’t happen overnight. You can see the slow decline of Miley’s sweetie-pie persona over at least the past five years.

In 2008, John Travolta reportedly tried to recruit then-15-year-old Miley to the Church of Scientology. Perhaps the cult saw a crack in her shield of faith even then?

In 2009, articles starting springing up with headlines like “Miley: Party Girl or Christian?” The article, by Father Earnest Daily, asked the question, “Is Miley promoting a healthy vision of being a performer or is she slowly abandoning Christian principles?” How prophetic!

In 2011, Miley started flashing a new tattoo that supports gay marriage rights along with a Twitter post that read, “ALL LOVE is equal.” That set off a full-blown Twitter brawl with some of her fans. Let’s just say it got nasty, though not as nasty as her recent performances.

In 2012, articles started popping up like “Is Miley Cyrus a Convert From Christian to atheist?” and “Miley Cyrus Loses Her Religion” after she tweeted, “You are all stardust. You couldn’t be here if stars hadn’t exploded, because the elements (carbon, nitrogen, oxygen, all things that matter for evolution) weren’t created at the beginning of time. They were created in stars. So forget Jesus. Stars died so you can live.”

Wait, what? I’m sure I’ll get plenty of hate mail for saying this, but I fail to understand how a Christian can dare to propagate a quote to the multiplied millions that we should “forget Jesus.” I am not judging her salvation. Only God knows someone’s heart, but I do wonder if she has forgotten Jesus while she shoots for the stars.

No, I don’t think Miley Cyrus sold her soul to the devil as some may claim. But clearly, Miley has sold out to the spirit of the world.

Careful study of Scripture reveals that Jesus and His disciples battled against the spirit of the world, which battled against them. The warnings against the spirit of the world are repetitive. James compelled us to keep ourselves “unstained by the world” (James 1:27, NASB) while Paul warned us not to be “conformed to this world” (Rom. 12:2). John told us, “Do not love the world or the things in the world. If anyone loves the world, the love of the Father is not in him” (1 John 2:15, NKJV), and James clearly stated that a friend of the world makes himself an enemy to God (James 4:4).

In an article titled “Did the Church Let Miley Cyrus Down?” Movieguide writer Michelle S. Lazurek asks, “Haven’t we seen performances like this so many times before? Isn’t Miley Cyrus just another example of the exploitation of the music industry and the materialistic nature of our culture for monetary gain? Or is she much more?”

I don’t have all the answers, but one thing is certain: No one is forcing Miley to rub up against a married man twice her age in front of young girls on MTV, and no one forced her to strip naked and swing on a wrecking ball either. Miley was raised up with Christian values. She’s making her own choices. She is deceived.

My prayer is that Miley will be like the prodigal son and return to her Father’s embrace. God is just waiting to see her come running over the hill. Let’s pray Miley finds her way home soon. Can we at least agree on that?