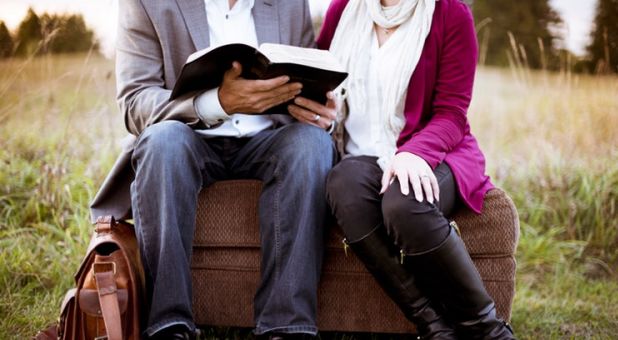 The Lord is raising up power couples!

As my wife and I were in prayer over marriages this morning, we began to receive directives to come against the serpent of deception that looks for opportunities to slither into marriages and families like the serpent did in the Garden. We began to see the God of peace manifest in marriages and crush the serpent who brings division under His feet (Romans 16:20)!

Suddenly I seen the river from His throne began to flow into marriages and wash away a refuge of lies that created division and it brought much healing.
The Lord declared that I am releasing an outpouring of My Spirit upon marriages and families to restore the joy of salvation, the delight of intimacy and deep healing as well. Just as the Garden of Eden was the convergence of heaven and earth, marriage in the kingdom of God will be also.
Many will begin to experience what it is like to bring their marriage into the secret place and enter warfare as a team instead of warring against each other. This scripture was given to us to declare that intimacy, trust and transparency was being restored to many.
Genesis 2:25
Now both of them were naked, the man and his wife, and they were not ashamed.

There are many husband and wife teams being raised up and the enemy desires to sifted you as wheat, but you have a High Priest Jesus who makes continuous intercession so that your faith does not fail! Be encouraged we are warring with you!

Wayland Henderson is a prophet who carries a heart for revival and moves in a strong revelatory gift with a unique anointing to impart prophetic understanding of Jewish roots across cultural and generational lines. He is co-founder of Greater Works Generation Ministries with his wife Jeanette, and their heart is to awaken a generation to their destiny to become mature sons and daughters of God. Jeanette is a prophetic psalmist, gifted teacher and is a worshipper at heart with the ability to usher in His Presence. Wayland is also co-founder of A.G.E.S. (which stands for Awaken, Gather, Equip and Send). A.G.E.S. is an apostolic and prophetic monthly gathering where several ministries have joined to gather regionally to see revival glory come forth in the Dallas/Fort Worth area. They currently reside in Arlington, Texas with their three beautiful children.